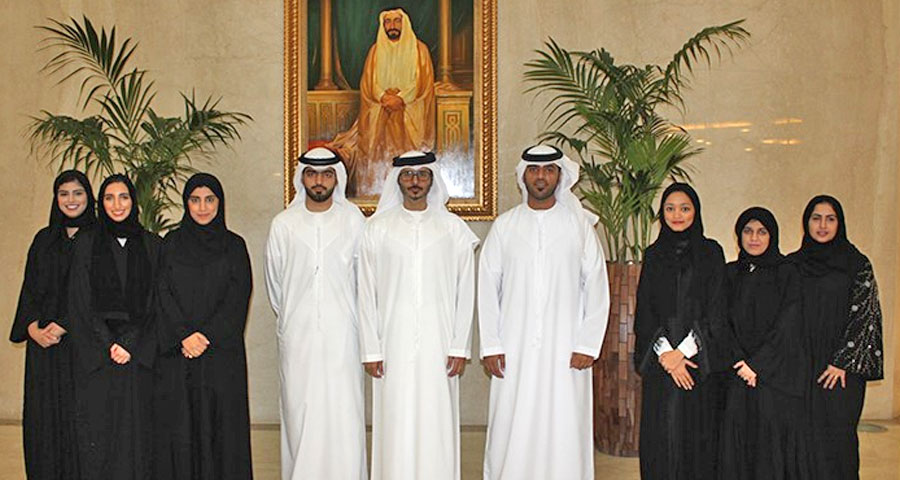 HE Mohamed Hilal, CEO of Mohamed Hilal Group, has underlined the-importance of positivity, creativity and inspiration in a person’s life, reiterating his belief that genuine inspiration starts from within a person themselves when they have the ambition to set goals in their lives.

The successful entrepreneur and businessman was speaking during a get-together with trainees of the ‘Thati Programme’ on Friday as part of the ‘Meeting with Leaders’ initiative, which is held annually to give the programme’s participants a chance to meet with the most prominent leaders in Sharjah in order to learn from their experiences and discover how they can become leaders themselves.

Launched in 2012 by Her Highness Sheikha Jawaher Bint Mohammed Al Qasimi, wife of His Highness the Ruler of Sharjah and Chairperson of the Supreme Council for Family Affairs, ‘Thati’ Programme’s initiative, aims to attract outstanding graduates from universities and colleges and give them the opportunity to build their leadership and management skills. The meeting brought the programme’s trainees together with HE Mohamed Hilal, a confident and ambitious leader of the Mohamed Hilal Group, which incorporates 26 brands.

During the activity the trainees gained a deeper insight into Hilal’s career, his life experiences and his leadership as he talked about the most important milestones his life, foremost of which he said was self-discovery. Speaking about his education at school, university and aviation college, Hilal highlighted his first steps into the world of business, which came when he founded his perfume project ‘Hind Al Oud’ in 2001, borne out of a passion for scents. Hilal then revealed his later projects in the field of chocolate and Emirati-themed restaurants, noting that his goal was to combine beauty with heritage and to ensure that Emirati products could compete in the global market.

Hilal stressed the importance of integrating what one enjoys with one’s business, saying: “Man does not explore himself but makes himself and I believe that every human being is an entrepreneur, each in his or her field of work, empowered with ambition, desire and setting clear goals”.

Hilal’s talk touched on the importance of creating a balance between work and family life, saying that work-life harmony was of great importance to every successful entrepreneur and that there was no need to separate the two. He added that he sees his family as his source of inspiration, as he shares the work that he loves with them. He said his family members offer their opinions and suggestions, an approach that helps strengthen their ambitions and increases their aspirations.

Speaking about the obstacles he has faced throughout his career, Hilal said: “Every challenge I encountered in reality was a step that allowed me to move up – failure is the last stage before success.” He noted that the obstacles he encountered during his career had made him more determined to succeed and to continue to innovate new and different products.

Mohamed Hilal concluded his talk by advising the trainees to manage their time effectively and to set priorities and targets, adding: “One should be able to effectively manage time, which is the most valuable of all currencies.”

He urged the young trainees to be satisfied with destiny, accept only the best, have trust in Allah and to continue developing themselves. “The key to maintaining success is to see it in others’ eyes.” Hilal said.