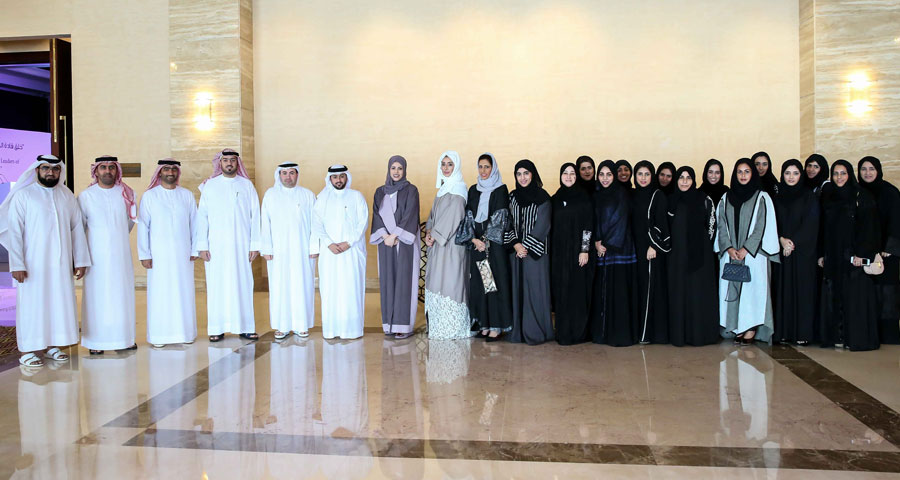 The first set of elite students from Thati Graduate Mentorship Programme at Reyada Centre for Learning and Development graduated yesterday at a ceremony held at Al Jawaher Reception and Convention Centre. The training centre falls under the patronage of Her Highness Sheikha Jawaher bint Mohammed Al Qasimi, Wife of His Highness the Ruler of Sharjah and Chairperson of the Supreme Council for Family Affairs.

The mentoring programme was launched in 2012 under the directiveof Her Highness Sheikha Jawaher bint Mohammed Al Qasimi, Wife of His Highness the Ruler of Sharjah and Chairperson of the Supreme Council for Family Affairs, to attract outstanding university graduates and help them build their leadership and management skills. Thati is an intensive two-year programme, which aims to create a generation of leaders equipped with confidence and skillsets that allow them to hold leadership positions.

HE Noura Al Noman, Chairperson of the Executive Office of HH Sheikha Jawaher Bint Mohammed Al Qasimi, thanked theorganisers and supporters of theprogrammefor their interest in developing the skills of young people so that they may better serve the UAE.

She said: “Every success story has a start, and the success story of Her Highness Sheikha Jawaher Al Qasimi’s organisations began in 1982 with the establishment of the Sharjah Ladies Club (SLC) to create a safe haven for women and children. Today, we can say that all Sheikha Jawaher’s organisationshave grown from there in keeping with her desire to provide an environment that suits everyone in the community.”

Al Noman added, “These organisations believe in the importance of embracing young leaders and also in providing training and guidance to the 1,500 male and female employees of the 20 organisations. This is why HH Sheikha Jawaher established the Reyada centre, to provide training, coaching and guidance to all employees, to equip them with new skills and expertise that qualify them to serve their country and society.”

The three graduates marking the first batch of female leaders graduating the programme are:

Alaa Al Shanasi, a graduate of the Higher Colleges of Technology with a degree in Information Technology (IT). She now holds the post of first executive at Sharjah Ladies Club where she is responsible for managing more than 100 staff and is in charge of seven facilities in SLC.

Aisha Al Mulla, a graduate of the Higher Colleges of Technology with a degree in finance, now works as the Head of Programmes at “Salam Ya Seghar” foundation. She is responsible for projects dedicated to Palestine and refugees, in addition to her interests in financial affairs.

Reem Al Hammadi, a graduate of the Higher Colleges of Technology with a degree in business administration. She now works as event coordinator at Sajaya Young Ladies of Sharjah, where she handles the Marketing and Event sections.

All three graduates are known for their merits and qualities, including their hard work and the ability to shoulder responsibility. Through the Thati programme they learnt new skills that allow them to give more and give their best. During the ceremony, the graduates were honoured for their hard work during the programme.

The sponsors and supporters of Thati programme from Sheikha Jawaher’s organisations and educational institutions in the UAE were also honoured during the event for their cooperation and involvement with the Reyada Centre’s team in making the programme a success.

Fatima Al Shehhi, Director of Reyada Centre, expressed her delight at the achievement made by the programme in drawing a number of university graduates. She said: “I would like to express my pleasure that we have the 4th batch joining the programme, and congratulate the first batch of female graduates on their achievement and hard work. They have shown dedication and commitment during the two years of training and coaching. I am quite confident that the graduates will utilize the knowledge and skills they have learnt in developing leadership skills at work. I would like to take this opportunity to encourage the graduates to continue to build and develop their leadership and administrative skills so as to always be at the forefront.”